Crayford Baptist Church began in 1810, with four members; John Row, Anthony Smith, Rebecca Smith and Rachel Hobbs. John Row became the first pastor, being formally ordained in 1811. Anthony Row was a grocer, and he donated the quarter acre plot to the church. 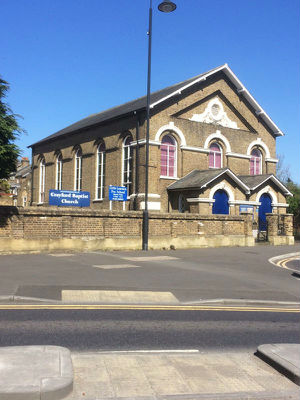 On this land there was a stable which was cleaned and renovated and constituted the first Crayford Baptist Church building. It has well been said, “What more fitting use for a stable, than as the birthplace of a Christian cause?” Our Lord began his life here, as, and with, the lowest. A small chapel was built on the site shortly after, which was enlarged in 1818 and again in 1830.

The congregation remained small for the first years of its life, but the Sunday School (the first in the district) flourished with 100+ children in the 1820s. In 1858 a new Sunday School was built at a cost of £350. This building is now the church hall, and it continues to play an important role in the activities of the church.

The church continued to grow steadily until 1847, when the Rev C H Hoskins settled as pastor. Then it is clear that the church made a great bound forward. The beginnings of the Pastors College are clearly linked up with this gifted man and the Crayford Baptist cause. In 1854 Mr T W Medhurst, the first student, was sent by Mr Spurgeon to Crayford to study under the guidance of Mr Hoskins who can therefore be said to be the first tutor of the Pastor’s College. The next pastor, E T Gibson, assisted Spurgeon in the production of “A Treasury of David.”

In 1866 the foundation stones were laid for a new building, which was finished and formally opened by C H Spurgeon on May 26th 1867, whose text on the occasion was Psalm 102 v 16. On this occasion, Spurgeon invited the congregation to assist in liquidating the debt occurred in the building of the chapel, and he himself contributed £10 and promised £5 towards each £100 that would be raised. The church, which cost £1300 to build was opened practically free from debt.

“It is not surprising, with such Spurgeonic influences (for such still operate) that the Church retains its strong evangelistic spirit. The industrial district, and the needs of the day, require it, as much if not more than ever. The Church, it will have been seen, has both age and tradition. Such are good in that they remind us of the faithfulness of God to his people. But if it stops there, they are worse than useless. The past is past. We need to remember the Pauline injunction to “forget the things which are behind, and press on to the prize of our high calling in Christ Jesus.” It is our high calling in 1948, as it was others in days gone by. Nobly they answered the call. May we not be lacking... As we face the future may we do so with hope and confidence... but bearing in mind that it can only be in so far as each one of us rise to our responsibilities, bear him up in prayer and work, each one realising his or her responsibility to their Lord, and the people around whom our Lord would have us serve.”

The closing statement in the 1948 Thanksgiving Service Brochure is: “The Church is for the community, and it is for YOU.”

The church continues to worship in the 1867 chapel, which was renovated and modernised during 2016. The earlier Hall is also still in use, for Sunday School and fellowship on Sundays, and during the week for church and community events.